One Step Walkers was founded in late 2010 by Andy Rogers with the full support of Nottinghamshire Area Ramblers to which One Step Walkers is affiliated. The aim was a group aimed at the 40’s and 50’s age group for members typically only able to walk at weekends, but feeling a bit too old for other groups they had previously walked with. 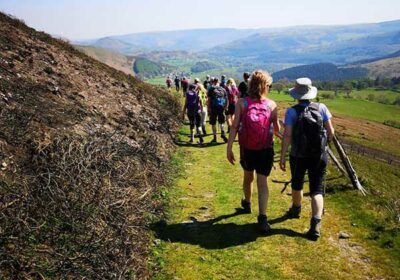 Andy and partner plus the four other founding members were all on the first walk at Monsal Head on 13th November 2010 on his now wife’s birthday; and were joined by Pete the first new member – more about Pete later. Integral to the founding of One Step Walkers were Wendy – Secretary, Dave – Treasurer, Phil – website and Ian – membership secretary.

Initially there were two walks a month, one long walk and one short walk, together with a pub meet once a month. The first weekends away were to Ludlow and Buttermere in the spring and summer of 2011.

Following on from a successful first six months, there was a further weekend away to Whitby, whilst the walks programme moved to a walk every week, and after a year One Step Walkers had over sixty members, and thirty members on the most popular walk.

To celebrate this success One Step Walkers had its first Christmas Meal at the Rose and Crown in Mayfield, taking over half the pub for a Saturday evening in December 2011 – this proved so popular that the whole pub was block booked for the following year and a disco added – this has now become a much loved annual event enjoyed by all including Daniel the landlord and family who provide such wonderful food and warm welcome. 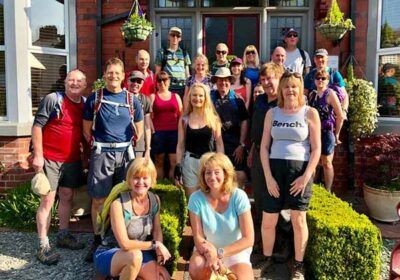 One Step Walkers ended 2012 with over ninety members and the walks programme was now split into short, evening and long walks, with Pete and Robin now joining the committee as walks organisers, and Nicole becoming Secretary.

In late 2013 Andy stood down from the Committee, having just married a fellow committee member; and Pete having been the first new member on the first walk took over as Chair. One Step Walkers had over a hundred members and the now annual summer BBQ and picnic at black rocks was also begun. The new committee included Andy Yeoman and Sue joining as evening and short walks organisers.

However none of the group’s activities can carry on without a committed set of volunteers in key committee roles – if you are interested in playing a part in the future of One Step Walkers – please contact us.

Is there anything wrong with this page?

Please note: Do not use this form for enquires or include any personal information as this feedback will be shared with the website developer.
We use cookies on our websites. You are free to manage this via your browser setting at any time. To learn more about how we use the cookies, please see our Cookie Policy Accept